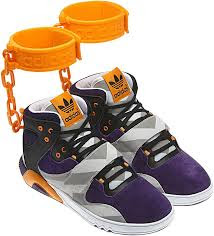 Adidas dropped pics of  some interesting shows recently. Their newest shoe, which was scheduled to hit stores in August  of this year, have been put on hold indefinitley. The "shackle" shoe was a design of eccentric desinger Jeremy Scott, who is know for out outlandish yet whimsical approach on fashion. Adidas faced a PR nightmare when Twitter and Facebook errupted with complaints on the design of the shoe. Adidas issued the following statement

"The design of the JS Roundhouse Mid is nothing more than the designer Jeremy Scott's outrageous and unique take on fashion and has nothing to do with slavery. Since the shoe debuted on our Facebook page ahead of its market release in August, Adidas has received both favorable and critical feedback. We apologize if people are offended by the design and we are withdrawing our plans to make them available in the marketplace."