Bobbi Kristina breaks her silence on Whitney's death with Oprah 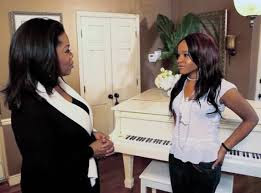 Whitney's Houston death has been on the most talked about media frenzies of 2012...and the hype surrounding it is far from over...the official cause of death has still not revealed. Immediately following Whitney's passing, the media's focal point has turned to her daughter, Bobbi Kristina.


The world has been waiting for BK to break her silence for the past month, and March 11, 2012 Oprah gave the world what they wanted....well kind of. She conducted an exclusive interview with Whitney's pride and joy...her daughter. The interview consisted of BK sharing how her last days were spent with her mother, and how she still feels that Whitney lives inside of her. She kept it beyond real, she spoke the truth...we didn't know the real Whitney, we know what the media highlighted about her.


Bobbi Kristina has vowed to carry on her mothers legacy through acting, singing, and dancing. In case you're wondering if she can sing at all...check out a clip of her singing Adele's song, "Someone Like You" right here

So how does she want people to remember Whitney?
"That she literally is an angel. I saw her hurt. I saw her cry. We held each other through that. They don’t know who she was. Everything people are saying about her – all that negativity, it’s garbage. That’s not my mother. … In reality, I know who she was. Her family knows who she was."

Check the complete interview with Bobbi Kristina below