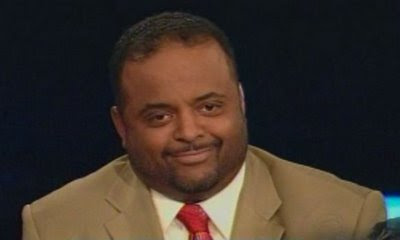 So CNN finally caved in to the pressure from various gay activist groups and suspended Roland Martin. During the Superbowl Roland tweeted the following statement in regards to David Beckman's underwear ad.

Martin received numerous tweets and messages from people upset about his "gay bashing". The pressure was put on CNN to terminate Martin for his comments. CNN obviously caved and decided to suspend Martin. They issued the following statement this morning.
"Roland Martin’s tweets were regrettable and offensive. Language that demeans is inconsistent with the values and culture of our organization, and is not tolerated. We have been giving careful consideration to this matter, and Roland will not be appearing on our air for the time being.”