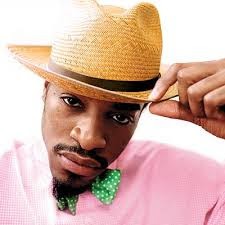 Recently there have been numerous reports that Big Boi and Andre 3000 were teaming back up for another Outkast album.....Andre 3000 speaks out regrading the Outkast album in this latest interview with GQ. Check out what he said below

GQ: So does that mean we can expect to hear the album we’ve all be waiting on?
Andre 3000: It depends on which album you’re talking about.
GQ: A new ‘Kast album!
Andre 3000: There’s been a lot of talk on the Internet about an OutKast album and I have to say that as of now, there are no plans for another OutKast album. There’s a lot of music on the horizon. I’ve been living off the excitement of new artists. I’ve been privileged to have these new artists kind of reach out and grab back and say, “Hey, Andre, we want you on this song.” So I’ve been taking those calls and for the last two years, I’ve been doing collaborations. So these new artists have kind of been keeping me alive. I’ve just really been feeding off of that and this year I think I’m planning to do a solo project. I don’t know when it will come out, but hopefully it’ll come out this year. As far as OutKast, I really don’t know if or when that will happen.
GQ: What’s the new solo album going to be like?
Andre 3000: The only thing I can really say is I’m going to get back to having fun because that’s what it was all about when I started this in high school—with OutKast—those were like high school dreams. I’m 36 now, so I have grown-man dreams. This album will just be me being myself as normal.