Rihanna gets called a "Nigga Bitch" 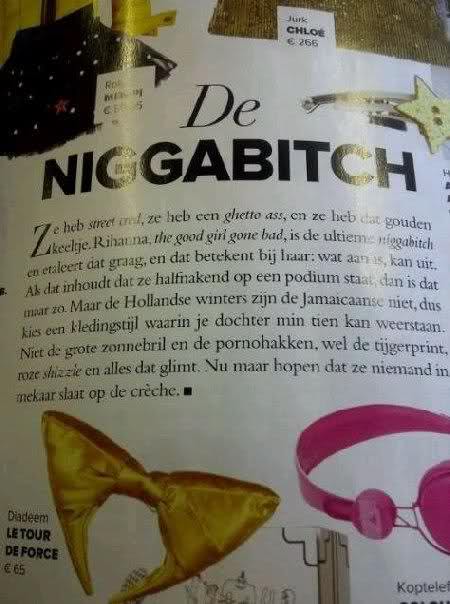 So a Dutch magazine decided to run a story about Rihanna...seems harmless right? Well not if youre called a "nigga bitch" WTF is that?! Sigh...below is their description of a nigga bitch


“She has street cred, she has a ghetto ass and she has a golden throat. Rihanna, the good girl gone bad, is the ultimate n***abitch and displays that gladly, and for her that means: what’s on can come off. If that means she’ll be on stage half naked, then so be it. But Dutch winters aren’t like Jamaican ones, so pick a clothing style in which your daughter can resist minus ten. No to the big sunglasses and the porn heels, and yes to the tiger print, pink shizzle and everything that glitters. Now let’s hope she won’t beat anybody up at daycare.”
I know Rihanna has been on sort of a downhill spiral but damn....that is so disrepectful.
Rihanna then fired back on Twitter with
@evajackie I hope u can read english, because your magazine is a poor representation of the evolution of human rights! I find you disrespectful, and rather desperate!! You ran out of legit, civilized information to print! There are 1000's of Dutch girls who would love to be recognized for their contributions to your country, you could have given them an article. Instead, u paid to print one degrading an entire race! That's your contribution to this world! To encourage segregation, to mislead the future leaders to act in the past! You put two words together, @evajackie with the intent of abasement, that made no sense..."Nigga BITCH"?!....Well with all respect, on behalf of my race, here are my two words for you...FUCK YOU!!!
Eva then apologized on her Facebook page

Dear readers,
First: thanks for all your responses. We are of course very fed up over this and especially very shocked. However I’m glad that we’re engaging in a dialogue on this page — not everybody does that. Thanks for this. Other than that I can be brief about this: this should have never happened. Period. While the author meant no harm — the title of the article was intended as a joke — it was a bad joke, to say the least. And that slipped through my, the editor-in-chief’s, fingers. Stupid, painful and sucks for all concerned. The author has been addressed on it, and now I can only ensure that these terms will no longer end up in the magazine. Furthermore I hope that you all believe there was absolutely no racist motive behind the choice of words. It was stupid, it was naive to think that this was an acceptable form of slang — you hear it all the time on tv and radio, then your idea of what is normal apparently shifts — but it was especially misguided: there was no malice behind it. We make our magazine with love, energy and enthusiasm, and it can sometimes happen that someone is out of line. And then you can only do one thing: apologize. And hope that others wish to accept it.
From the bottom of my heart I say it again: we never intended to offend anyone. And I mean that.
Regards,
Eva Hoeke
Then she decided to resign a few days later.

Ok so I would LOVE to know how that is a joke. Who in America says that? Not only is nigga derogatory but so is bithc. iCant smh. Sigh...Im not that biggest Rihanna fan but that was ridiculous...and if I were her I would be looking into a lawsuit
This is also a clear example as to why as African Americans we shouldnt call ourselves nigga and bitches but then races think its ok and we get upset.