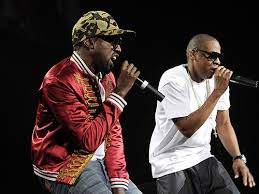 A reported tracklisting from Jay-Z and Kanye West's Watch The Throne album has surfaced.
As previously reported, the album was scheduled to drop in February but will now be released in July.
Now according to Hip-Hop blog DubraOnTheRocks.com, the tracklisting has been released.
While the features are kept to minimum, the final tracklisting confirms a song with Beyonce and Bruno Mars.
Check out the reported Watch The Throne tracklisitng below.
Do you believe it?
1. Lift Off (Feat. Beyonce & Bruno Mars)2. Murder To Excellence3. Illest Motherfucker Alive4. Why I Love You So(Guilt Trip)5. That Shit Crazy6. Living So Italian7. Who Gonna Stop Me8. Whole Lifetime9. We Are Young10. Anthem
SOURCE