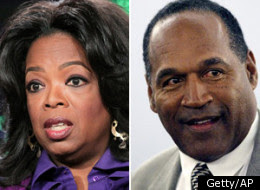 Oprah's representatives moved quickly to quash rumors that the talk show queen is conducting an interview with O.J. Simpson in which he confesses to murder.
The rumor raced around the Internet after the Daily Mail picked up a National Enquirer report that Simpson will admit to killing his late wife Nicole in a jailhouse interview.
But representatives for Harpo, Oprah's company, flatly told the Hollywood Reporter, "that's not true."
However, it's no secret that Oprah has been pining to do exactly this kind of interview. During an appearance at a cable convention earlier this month, she said that her dream is to have Simpson confess to her.
"And I am going to make that happen people," she said. "I don't just want the interview. I want the interview on the condition that you are ready, Mr. Simpson."
SOURCE