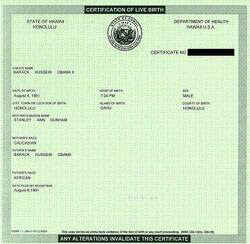 This morning the White House released the long form of President Barack Obama's birth certificate due to speculation from Donald Trump that the president was not born in the United States and therefore, shouldn't be allowed to be president.
Trump's response: "I've accomplished something nobody else has accomplished," in getting the birth certificate made public. Trump said he would want to see it before proclaiming it authentic. "I want to look at it but I hope it’s true."
(via MSN)