By TammyTalks April 15, 2011
I recently had the pleasure of conducting an interview with MY favorite St Lunatic and Grammy award winner  ---> Murphy Lee.
I still remember the first time I saw him on tv. LoL I have been a fan from "Whats Da Hook Gone Be" to "Welcome To Atlanta (Remix)" to "Shake Ya Tailfeather".  Murphy Lee has been extremely busy with his record label U C Me Entertainment, and now his wine label, Freaky Muscato. He has worked with a number of artists including Kanye West, Nelly, Chingy, Snoop, Jermaine Dupri, and more. He is now back with his latest mixtape Wine, Weed, and Women. Check out the interview to find out what he has been up to lately... 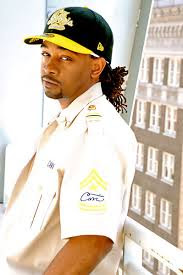 Your real name is Torhi Harper, where did you get you stage name of Murphy Lee?
MURPHY LEE IS MY GIVEN MIDDLE NAME...I WAS NAMED AFTER MY GRANDAD..BIG MURPHY LEE

You began your career as a member of the St Lunatics, how did you guys come up with that name?
WE CAME UP WIT THE NAME ST LUNATICS IN 1993 DURING A RAP CIPHA WIT TAB(ARTIST FROM DA LOU) ..HE WAS EAZY E ARTIST AT THE TIME..ANYWAY..DURING THE SESSION SOMEBODY SAID "RUNNIN THRU THE LOU LIKE A ST. LUNATIC" ....N DAT WAS DAT....

In 2003, you released your debut solo album "Murphy's Law". what was that experience like?
DROPPIN MURPHYS LAW WAS AMAZING EXPERIENCE..I NEVER THOUGHT I WOULD DROP A SOLO ALBUM..NEVER THOUGHT ABOUT IT...BUT THE DEMAND COMING FROM THE WHOLE MOVEMENT MADE IT OFFICIAL....I JUST WANNA THANK ERRYBODY WHO WAS A PART OF THAT....I HAD LIL WAYNE ON MY FIRST ALBUM...IM DA SHIT..LOL

You have been featured on a number of your peers songs including Nelly "Air Force Ones", J-Kwon "Tipsy", and Jermaine Dupri "Welcome to Atlanta" remix. Which one did you have the most fun working on?

I THINK ALL WAS EQUAL BUT THAT TAILFEATHER WAS SPECIAL CUZ WE ALL WAS THERE IN DIDDYS STUDIO AND  IT WAS MY SINGLE FOR MY ALBUM ALSO...BAD BOYS SOLD 2MILLION COPIES....OFF THAT SINGLE ALONE.....AMAZING..GRAMMY AMA'S ALL DAT...BUT I WAS HAPPY TO BE APART OF WELCOME TO ATL...DAT WAS A DAMN GOOD LOOK...JD DA SHIT
Jumping into the present, you have relased a number of mixtapes lately with the most recent being Wine, Weed, and Women. what made you hop back in the booth so heavily lately?
UM ACTUALLY I NEVER HOPPED OUT OF THE BOOTH...I WAS GOIN THRU LABEL ISSUES WITH UNIVERSAL SO I HAD TO GET OUT OF THAT TO BE ABLE TO FEED U THIS GOOD MUSIC I HAVE TO OFFER..SO FOR DA PAST 2 YRS I BEEN GIVEN MY FANS MUSIC DAILY WEEKLY N MONTHLY...

Any new projects in the works?
NOW WE READY TO TAKE IT UP ONE NOTCH WIT MY UCME SITUATION N THE NEW WINE I HAVE CALLED "FREAKY MUSCATO"...DRINKFREAKY.COM N WINE WEED & WOMEN MOVIE N TOUR COMING DIS SUMMER ALSO

For more information about and to order Freaky Muscato go to http://www.drinkfreaky.com/