Dancing With The Stars Season 12 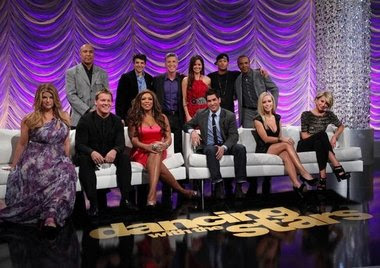 Here is the final list for Season 12 of Dancing With The Stars
Kirstie Alley: Television star who earned seven Golden Globe and eight Emmy nominations, winning one Golden Globe, two Emmys and three People’s Choice Awards. She co-wrote and starred in Showtime’s critically acclaimed comedy “Fat Actress.”
Chris Jericho: A six-time WWE world champion, two- time New York Times best-selling author, lead singer of the rock band Fozzy and host of the ABC game show “Downfall."
Sugar Ray Leonard: Boxing legend and host and mentor for the first three seasons of the series “Contender” on NBC and ESPN.
Ralph Macchio: Actor, writer, director and producer who first gained world recognition for playing the title role in the popular classic “The Karate Kid.”
Romeo Miller: The son of businessman and music mogul Percy Miller (Master P), Romeo has sold over 10 million records as a multi-platinum music artist.
Chelsea Kane: She currently stars in the web series “The Homes” on Lockerz.com. She is also the voice of Bea in Disney Channel’s animated comedy series, “Fish Hooks."
Petra Nemcova: Born and raised in Karvina, in the Czech Republic, the model suffered a broken pelvis and severe internal injuries while on vacation in Thailand during the devastating 2004 Tsunami. After her recovery, she created the “Happy Hearts Fund” (www.happyheartsfund.org).