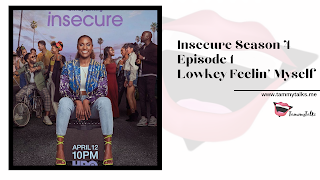 Finally!!! Okay, so Insecure is back after taking 2019 off since Issa Rae was booked and busy with the big screen, we missed her but we understand. It was announced that this season would have 10 episodes, with is 2 more than we are accustomed to, and we know that Issa and the rest of the cast will make great use of the additional 60 minutes.

The episode started with Issa laying on the couch watching the new "show within the show" Looking for Latoya, which seemed to be a missing person documentary on Latoya, a woman who was gone missing. During the course of the episode we see the host of the show is Rose Cranberry, who is played by none other than Terri J Vaughn, better known as Miss Lovita Alize Jenkins. We saw cameos by Porsha Williams, Ray J, and Carl Anthony Payne Jr for starters as key people in the documentary. The show within the show is one of my favorite parts of the Insecure for a few reasons, one being that it's a great way to unify the cast members and bring everyone together, and two Issa finds the random celebrities to bring in to the show, which adds another layer of fun.

The major part of the show is Issa being on the phone and telling someone that she "doesn't fuck with Molly anymore," which definitely raised my eyebrow, but what?! The series for all intents and purposes focuses on Molly and Issa friendship as much as it does Issa's relationships with men. By the end of the episode, we definitely start to see the beginning of the end with the two of them, which know that I think about it started last season.

I don't want to give a play by play of each scene, since we all watched the episode already, so I'm just going to focus on the highlights. Let's start with Kelly, who is working Issa's mixer as a bartender, ready to risk it all for the greater good of helping out a friend, and busting a nut for herself. She's always hilarious in every scene she's in, and is in my opinion the only real friend that Issa has. 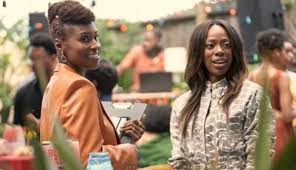 Tiffany is up next, we first see her when Issa is at Condola's office with the two of them meeting to discuss more details of the mixer they are throwing together. When Tiffany arrives it slips out that Lawrence is the guy that Condola has been dating and who sent her the flowers that are on her desk. Tiffany knew that the two went on a date after the baby shower but didn't know they were still dating, supposedly. Now, in my opinion, Tiffany isn't a real friend, because the moment she found out that they went on a date, she should have called Issa and gave her a heads up that one of her friends went on a date with Lawrence, even if she didn't think it was anything serious.

When we see Tiffany later at the mixer it's clear that there is an awkward tension between Issa and now Condola. Tiffany knows that she messed up and feels slightly guilty because she tells Molly that she thinks Issa is mad at her.

With that, let's move over to Molly, we first see her doing weed yoga with Issa in the beginning of the episode, where they seem to be on good terms and everything is cool. Later we see her out on a date with Andrew, Asian bae from last season, who has now cut his ponytail off, I'm not a fan at all but whatever. While at first glance it appears the two are a couple, we learn later that Andrew has been seeing other people, as Molly was starting to catch feelings. As soon as Andrew reveals that he is dating other people we can just about tell that Molly is going to ruin their "relationship" rather than just be honest about the situation.

There is a scene between Molly and Issa at her mixer that really sets the tone for their relationship for the season, in my opinion at least. Molly clearly has an attitude and is in a mood when she arrives at the mixer, stemming from the revelation from Andrew that he is still dating other people. Now we all know that Molly can never let Issa have a moment or be too, too happy for too long so her vibe is all the way off at the mixer anyways, and Issa can tell. While Issa is giving her speech about the block party to her potential sponsors at the party you can see Tiffany telling Molly why she thinks that Issa might be mad at her in the background. 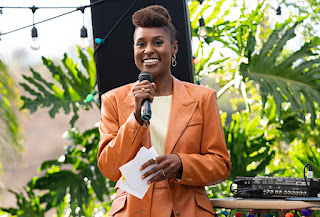 Once the mixer wraps up and Issa is riding a high since she was able to secure a lot of sponsorships, Molly and her moody person is quick to bring down the high by, as usual, making everything about her and telling Issa about her and Andrew, to which Issa is quick to switch from being excited to play the supportive friend role, one we've seen her have to play with Molly often.

Molly then begins to question Issa and why she is still willing to work with Condola, telling her "you know your life doesn't have to be this messy, right?" The nerve! Molly, who spent a whole season messing around with a married man, and being low key upset when we would occasionally put his wife first. Not to mention, Molly personally knows his wife, and would see the two of them out as a couple at group events. Yes, that same Molly has to nerve to call Issa messy, just wow. It's clear that Issa was taken aback by Molly's statement, and her mood quickly changed. We can even see when she is taking the garbage out later that she is over Molly, and irritated with her, and she very well should be.

Finally, let's talk about Issa, we first see Issa with her self care Sundays with Molly, where she informs us she still has no job and no bae. So not a lot has changed since the end of last season when things with Nathan ended awkwardly and abruptly when he ghosted her and left the state. We do see that Issa has a fuck buddy aka TSA bae. While it doesn't seem like he and Issa are exclusive and serious, we watch an awkward sex scene before he lives Issa with Hennessy and Cali weed that he confiscated at the airport. 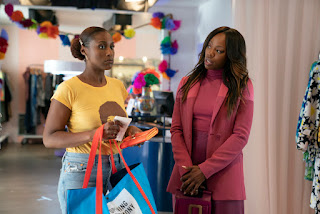 We also get a scene with Issa and Molly out shopping, well Issa is returning clothes she's worn and exchanging them for new outfits so she doesn't keep repeating outfits when meeting with Condola and potential sponsors. While the scene is light and comedic, there is some subtle shade thrown by Molly once again, that we, the viewer, are used to seeing, and Issa does seem to catch but she brushes it off.

Issa meets with Condola and we are able to see just how much chemistry the two of them have while working together. They are totally in sync, ideas are bouncing freely between the two, they are finishing each other's thoughts in regards to the mixer, and you can tell it's a positive vibe, all for that vibe to inadvertently be ruined when Issa discovers that Condola's mystery boyfriend/bae is Lawrence. Even though the two were extremely awkward at first at the mixer, we see by the end of the episode that they are back in a positive groove, and we know that they are going to keep working together.

Now let's talk about Issa and Molly's relationship. For all intents and purposes Molly is a decent enough friend, right? But is that enough to sustain a friendship? More often than not we've seen Molly completely kill Issa's groove when she's in a good mood. Now, no one is saying that Molly is a terrible person, or that Issa is just this amazing person and friend, because she has her flaws as well, but Molly just seems to suck the life out of Issa. We've seen Molly basically shit on Issa for her job, then lack thereof, her relationship, her finances, her car...Molly takes the air out of the room when she enters it, and while that's great for Molly....it has to suck for Issa.

I'm excited for the season, and to see the demise of the relationship. It's been a long time coming, at least 3 seasons worth. LOL.