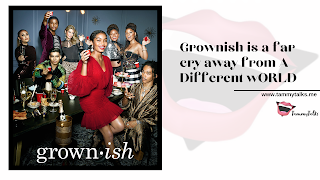 Now, don’t get me wrong, I like Grown-ish, I think it’s entertaining, but it’s a far cry from A Different World. I didn’t expect the show that be identical to A Different World, mainly since Zoe wasn’t attending an HBCU, so there’s that, but I think the show is missing the mark on at least 2 major marks.

Let’s run through these.

Like I said before, don't get me wrong I love the show, I think it's great for the younger generation since it does highlight different aspects of being a college student in this day and age. The pressures of social media, fitting in, budgeting money, drugs, peer pressure etc....but it just wraps everything up in a nice little bow. I would like to see some of the deeper story arcs carry over a little bit.


Now that I've vented a little bit about what I think is missing from the show, let's talk about what I love about the show.


Be sure to check out Grownish Thursday nights on Freeform.