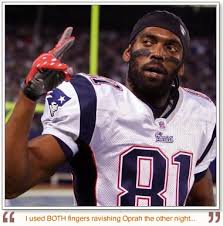 Free agent WR Randy Moss has announced he's retiring from the NFL 13 years after the Minnesota Vikings used the 21st overall pick on him in the 1998 NFL draft. Moss will end his career with Hall of Fame worthy numbers in several stat categories.
Receptions: He's tied for eighth all-time with 954 catches. His season-high came in 2003 when he snagged 111 receptions, which helped earn him a Pro Bowl and All-Pro nod.
Receiving yards: He's fifth all-time with 14,858 receiving yards. In that 2003 season, he notched his career-high receiving for 1,632 yards. As late as 2009, he was still a 1,000 yard receiver so he was still very productive late into his career.
Touchdowns: He's tied for 2nd all-time behind WR Jerry Rice. This is where Moss made his money. In his rookie year, he had a whopping 17 touchdown receptions, a feat he accomplished twice in his career. That wasn't his best though. In the Patriots undefeated 2007 regular season, Moss broke Rice's single-season touchdown record with a freakish 23 touchdown receptions.
Catch the full article here