Kelly Rowland goes PLATINUM and back to the sudio

Kelly Rowland earned her first solo platinum plaque this morning for her hit song Motivation. She took to Twitter to share his excitement. Congrats!!! Im actually surprised it too this long to go platinum...its been dominating the charts for so long. But better late than never. 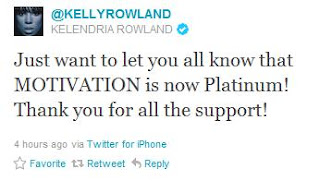 Hope this is a sign to come for more success in the future. Even though her debut Here I Am was just released a month ago, she is already working on her next album. (Interesting) She is off to a great start by once again working with famed songwriter Rico Love. Check out what Rico Love had to say about the upcoming project.
“I’m starting Kelly’s new album soon,” reveals Love, who penned the smash ‘Motivation’ and several other cuts off Rowland’s third album. “While she’s on tour, I’m gonna be writing records for her new album. We can kinda roll that out and drop her new single in late spring. Excited about that.” via RapUp.com
I wonder why she is in such a rush to start a new album....