Abercrombie pays Jersey Shore cast not to wear their clothes 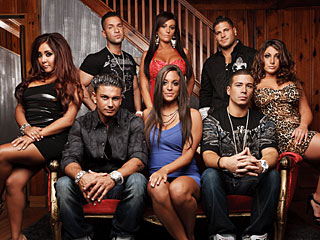 Abercrombie & Fitch says in a news release posted Tuesday that it’s concerned that having Sorrentino seen in its clothing could cause “significant damage” to the company’s image.
Abercrombie says a connection to The Situation goes against the “aspirational nature” of its brand and may be “distressing” to customers. The Ohio-based retailer says it has offered a “substantial payment” to Sorrentino and producers of the MTV cable television show so he’ll wear something else.
A spokesperson for Abercrombie & Fitch commented: “We are deeply concerned that Mr. Sorrentino’s association with our brand could cause significant damage to our image. We understand that the show is for entertainment purposes, but believe this association is contrary to the aspirational nature of our brand, and may be distressing to many of our fans. We have therefore offered a substantial payment to Michael ‘The Situation’ Sorrentino and the producers of MTV’s The Jersey Shore to have the character wear an alternate brand. We have also extended this offer to other members of the cast, and are urgently waiting a response.”
The company says it also is making the offer to others in the hard-partying cast. An MTV spokeswoman did not immediately return messages for comment on Wednesday.
via Bossip