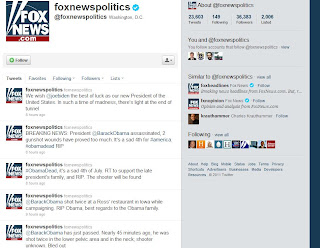 Once again Fox News has proven how bias and racist they really are. Apparently early this morning their Twitter account was "hacked" and a number of inappropriate tweets claiming that President Obama was assassinated were tweeted. Check out the screenshot to the left. Fox News then took to their homepage to clear up the tweets.


They issued the following statement:
"FoxNews.com's Twitter feed for political news, FoxNewspolitics, was hacked early Monday morning. Hackers sent out several malicious and false tweets claiming that President Obama had been assassinated. Those reports are incorrect, of course, and the president is spending the July 4 holiday with his family. The hacking is being investigated, and FoxNews.com regrets any distress the false tweets may have created."