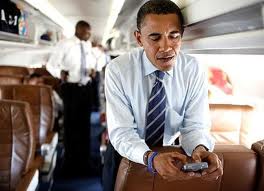 Tech savvy President Obama is taking his re-election campaign to the next level. The commander in chief will hold his first ever Twitter town hall this afternoon answering questions on jobs and the economy for peeps who post inquiries using the hashtag, #AskObama.

Jack Dorsey, Twitter co-founder and executive chairman who sent the first Tweet ever in March 2006, will moderate the discussion. Dorsey will ask Obama the questions Twitter users ask, and the President’s responses will appear in real-time on the White House Twitter feed.
The “Tweetup” will serve as a live audience for the virtual town hall in the East Room of the White House today at 2 p.m. ET

While President Obama would like to focus on jobs and the economy, the topics for today’s event are up to Twitter, which will be picking the questions based on the trends and “hot topics” in the questions submitted to #AskObama.

Thousands of questions, posed in Twitter’s 140-character limit, have poured in ranging from Afghanistan to the deficit to legalizing marijuana. The president, however, will not be tweeting his responses. Instead, he will offer answers aloud while condensed versions of his responses will be tweeted at @townhall. Did you #askobama?