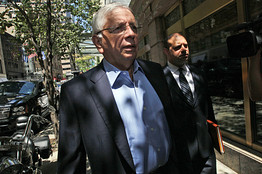 NBA owners are set to lock out their players as a labor agreement expires at midnight, the players union said, threatening the 2011-2012 season.
"The gap is too great," between the players and the owners, said players union head Billy Hunter, after a meeting in New York between the two sides failed to reach a resolution. The move would prompt a second major sports work stoppage, as the National Football League is also in the middle of a lockout..
Catch the full article here