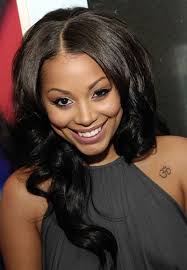 Lauren London had a chit chat with the author of the book, Skin Deep, Kathleen Cross.  Kathleen is known for examining how skin color has an effect on races in society.  But while interviewing Big Happy Family actress Lauren London, it was revealed that Lauren was once engaged to her son's father and ex, Lil Wayne.  And obviously they kept that little tidbit a secret. And now, she's clearing up misconceptions about her and Weezy's relationship (and her relationship with his other baby mamas) as everybody has had an opinion the last few years.  She's been labeled everything from "sadly just another baby mama" to "desperate". Check out an excerpt from the interview after the jump.
SOURCE
KC: What is the biggest misperception people have of you? What misperception bothers you most?
LL: That my son is the result of some kind of one night stand or groupie encounter with his father. I struggle with deciding when to answer or ignore the constant speculation about my private life, because I feel like that doesn’t belong to anybody but me.
KC: Do you want to go on to the next question, or clear up the speculation now?
LL: I met Dwayne when I was 15 years old. I’ve known him a very long time, and we were in a relationship that didn’t make it. We tried more than once to revive it, and we were engaged briefly years ago, but we eventually parted ways. People see the “Lil’ Wayne” persona and think they know who he really is. My son’s father is an intelligent, loving and lovable person who will always be a dear friend. That is all.
KC: If you don’t mind another personal question, there is a lot of talk about how well the mothers of his children get along. What’s the real deal?
LL: We are all good-hearted women who love our children and we want them to know each other. Real friendships have grown from that foundation and the result has been more love, less drama and less trauma for our kids.