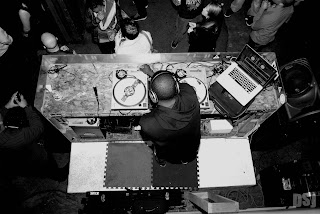 Who are you?
I'm just a dude, playing a dude, disguised as another dude. My name is Tyrone and I go by DJ Bizzon. I DJ in Milwaukee and I play a bit of everything, but mostly hip hop, funk, soul, R&B, old school, rock, pop and alternative. Pretty much if it's funky I play it. My main focus, is and always will be the quality of music. As with most forms of media and entertainment, the stuff you hear most is just what it is, popular. Doesn't always mean it's the best or that I like it. I try to focus my DJing and mixes on music and the skills of DJing, instead of just playing what you just heard in the car, all while having a party.

I co-host the Mad Kids Radio Show on 91.7FM with Kid Cut Up where we play old school and underground hip hop. Over on JSOnline, I run the Takeover blog with DJ Jank where we do interviews, album reviews, show recaps and pretty much all things hip hop related in the Milwaukee area. Both of these are outlets for the classic hip hop sound that we all love and reminisce on that, which is still evolving and being created today.

Throughout the year I host a series of freestyle battles for MCs to show their talents on the mic. I help out with the Miltown Beatdown, a beat battle that showcases the producers of Milwaukee every year. And also, I work at True Skool, a hip hop youth organization focused on the arts and the community.


What is your biggest motivation/inspiration?
My biggest motivation is to stay true to being happy for myself. I worked as a computer engineer for 4 years and after a certain point I just wasn't happy with what I was doing. All the while, I was telling everyone around me to follow their dreams and don't worry about anything else. I think I was the only one during the recession looking to get fired. So one day I make the decision to focus everything in my life into DJing and I quit my job to do that. I gotta wake up everyday and ask if I'm happy and if I'm not, what do I need to do to fix it.
At least now I can be honest and say I am happy and I can do what I love everyday. I also hope that I can encourage young people like my young nephews to not have to spend so much time doing stuff they dislike just for a check. Focus on that sooner and when you get to that age where you're on your own, doing what you love can just come natural. Clearly, I wish I would have done that.

I'm also motivated by just loving music. Sure, there is a lot of wack stuff and it's nice to combat some of it with good music. But in general I just wanna help bring more cool, interesting music and mixes to people in hopes they do the same. There is so much to listen to and check out and I just wanna spread it to people. I just wanna see dope stuff everyday no matter who makes it.


When did you first realize you were talented in your craft?
I first noticed it a few years back when people started asking me to DJ for them. I started DJing out for friends parties in 2008 and they all said I was cool, but they are my friends, of course they are gonna say that. But then their friends actually thought I was alright and I started getting calls. More gigs happened and I felt pretty confident that I could DJ pretty well.
Also I would spend time at home practicing and learning new techniques which gave me more confidence. I critique myself more than anyone and I'm honest with myself on what I'm good and bad at. So when people say something good or bad about my skills, I take it in accordingly and use it to get better.


Where can fans see/hear more of your work?
The best way is to just come check me out live sometime. I DJ regularly at BYO Studio Lounge (2246 S KK) on Thursdays and at Moct (240 E Pittsburgh) on Saturdays. As mentioned before, Tuesday nights I co-host the Mad Kids Radio Show with Kid Cut Up on 91.7FM WMSE from 9-12. Check outwww.madkidsradio.blogspot.com for all the show info, playlists and interviews.
Also, I run a hip hop blog called the Takeover with DJ Jank on JSOnline where I blog about local and national music, do interviews and post on all things hip hop. Check it out:
www.jsonline.com/takeover


Why do you refuse to give up?
There is so much to learn, so much I still don't know, but I want to learn it. That says more to me than anything else about why I DJ. I just want to all the time and I never felt that way about anything else in my life. Also, no matter what mood I'm in, happy, angry, pissed,whatever, when I actually start to play music, read the crowd, play some remix I made and get the party going, DJing makes stuff better, more than I can say for engineering lol.
- Show quoted text -
--
-TyroneDJ Bizzon