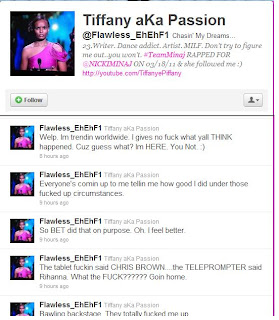 I've always said that the BET awards shouldnt be live. Sigh....this video proves why. Tiffany Green, the viewer that gives out the viewer choice award. said the wrong name of the winner. Saying the the wrong name is bad enough.....but to transpose Chris Brown for Rihanna is 10x worse. Lol. While it easy to blame the poor girl, it defitinely wasnt her fault. If you watched the awards you can tell the teleprompter and the tablet said 2 different names which confused her. Which would you have said the name on the table or the name on the teleprompter.  Tiffany Green took to twitter shorty after the incident.
BET programming executive Stephen Hill admitted the error was BET’s fault. “That BET Awards Viewer’s Choice mix-up was due to human error,” he tweeted. “And I was the human that made that error. I apologize to ALL affected.”