Maal Himself of Misen Lync 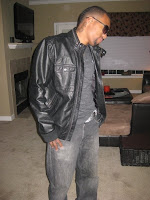 1) Give the readers a small introduction about yourself.
My name is Maal Himself 1/3 of the group Misen Lync I represent the Umbrella Music Group 28 years young lol
2) Where did the name Misen Lync originate from?
We felt like alot of people at the time in music locally or nationally used the same template for musical success. Trap songs, dance songs,just hip hop, or singles for women. We felt like there was a mixture missing, a link in the chain. We represent the mixture The Misen Lync

3) How long have you 3 been a group?
Collectively, i would say 5 years maybe. Tks and Toine Jay were a group previously along with Ray Nitti(different group name then) so i was an addition and we took it from there.

4) How many albums/mixtapes do you have as a group?
3 mixtapes; Breaking The Cycle, Barz and Beatz, and and upcoming Ep/mixtape called Both Sides of the Mirror

(Breaking The Cycle and Barz and Beatz are both available for download on datpiff.com search for Misen Lync)

5) What is your favorite Misen Lync song? Why?
Wow, ummm.. Good question.. I am going to say a new song we did for the Ep/Mixtape called "Through The Wall". I like it because we actually sat down and spilled our emotions and it's hard to get everyone to be personal and the song is nice, from the hook to the beat to the lyrics.

6) Any future group projects in the works?
There is an album in the works, another mixtape or so etc. MORE MUSIC lol :)

8) How would you describe your style as a rapper?
I am a witty,metaphorical type, i have fun,like to make people think.

9) Any solo porjects in the works?
Yes, i have actually decided to work on one. I don't know if it's an album or quick mixtape but there will be one from me.Lord willing of course lol

10) If you could collab with a well known artist who would it be? What would the concept of the song be?
I would love to trade bars w/Lupe Fiasco. It would be like some long winded extended metaphor for your name or something lol

11) What can we expect from Misen Lync and yourself in the future?
More music, more quality music that is.We are progressing well, as we have only been on the seen actively for 2 years so we are getting better and better and you'll hear that. I am slowly getting into fashion and also plan on helping Sose with his online magazine H2Omagonline.com

12) What 3 words do you feel describe you as a person.
Passionate
Appreciative( thanks for my first interview by the way lol)
NERD lol
Catch a snippet of a perfomance in the below clip